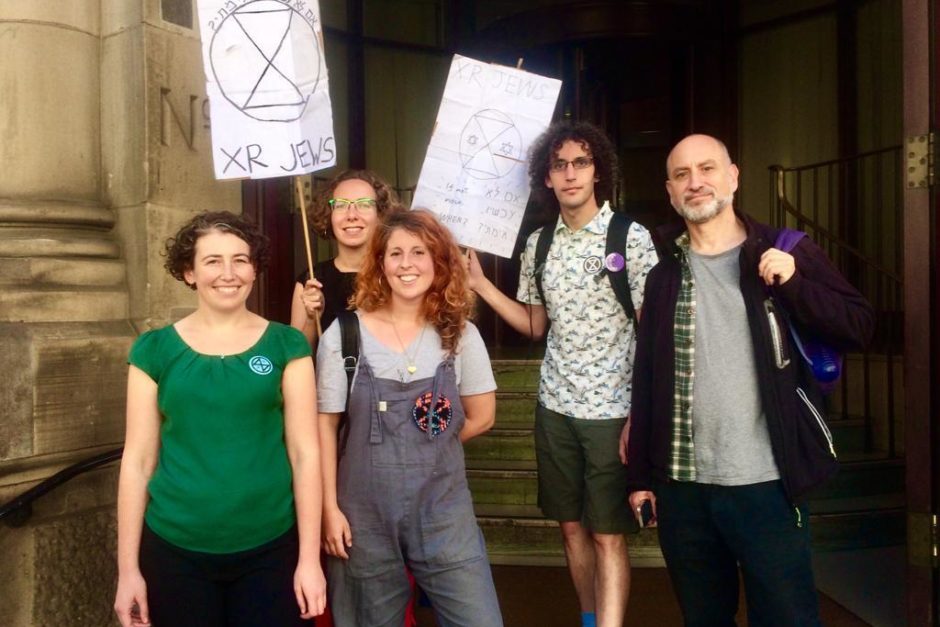 A rare and fine result for Elinor Milne

On Friday 20 September, Elinor Milne (far left) a 35 year old human rights worker who is planning to adopt a child, became the first of our defendants to receive an absolute discharge – an extremely rare and significant result.

Judge Snow decided not to impose punishment, despite Elinor’s guilty plea, out of concern for “an infant in need of a loving home”. This is the statement she read out in court before he made his decision.

“Thank you for the opportunity to speak today.

Firstly, I would like to apologise to those people whose lives were disrupted as a result of the protest. I am not someone who likes to inconvenience others, and I have never before risked arrest.

I would also like to acknowledge that my privilege as a white, middle-class woman allowed me to put myself at risk of arrest with an expectation of relative safety, and that many others in our society cannot have this expectation.

I am pleading guilty, but not because I think I have done anything wrong. Far from it – I feel complete certainty that my involvement with Extinction Rebellion, including the action for which I was arrested, is absolutely moral and correct. I am pleading guilty because my partner and I hope to soon start the process of adopting a child, and I hope that a guilty plea at this stage will make that process easier.

I sat in the road that day because – like most people – I want our future child, and all other children, everywhere in the world, to have a good life. Yet instead of that, we now know that, if we continue on our current path, children alive today face an unimaginably bleak future. In 2018, the UN said the world had 12 years (now 11) to halve greenhouse gas emissions to have any chance of limiting global heating to 1.5 degrees. Many scientists believe we have even less time.

This level of global heating already means devastation for many people, most of them in the Global South. And beyond this, even half a degree more will have disastrous impacts for hundreds of millions of people, animals and ecosystems. But new predictions this week suggest that we are on course for a rise of 7 degrees. This will be beyond catastrophic.

We are currently at just over one degree of warming, and we are already seeing disastrous weather events such as the recent hurricane in the Bahamas, mass extinctions, crop failures and forced mass migrations. The consequences of the climate crisis are falling the most heavily on those who have done the least to cause it. The injustice is breathtaking.

But those of us living in rich countries will not be exempt. If we do not change course, our children will live to see far more and far worse disasters. As so many children in the world already do, they are likely to see food shortages, wars and societal breakdown.

Reducing these appalling consequences requires a dramatic and unprecedented change in our societies, starting now. We need a wholesale transformation of our economy. Yet instead we continue day to day with business as usual – and with every day which passes the possibility of a liveable future grows slimmer. In a society in which 30 years of climate campaigning using traditional methods have seen carbon emissions increase enormously, interrupting business as usual is the only option left to us to attempt to change the catastrophic path we are on.

The Jewish principle which speaks to me about this is called in Hebrew “lo ta’amod al dam reyecha”. It means that we are obliged not to stand idly by when a life is in danger. Millions of lives are in danger – in other countries now, and in the future, the lives of our own children. I cannot stand idly by. It is this feeling that compelled me to act, and which has brought me to this courtroom today.

My career is in human rights, and I have spent years working for justice and the rule of law. I therefore respect the system represented by the court we are in today. My various jobs have all aimed towards a world in which legal and social systems uphold justice for each individual – a value with which I expect the judge and court are in sympathy.

However, if we destroy the foundations of life on earth itself, the work that you and I do towards a just world is all for nothing. Ecological and climate breakdown risk the collapse of our civilization. No institution will be safe from such a collapse – including the court we are standing in. This is all of our problem.

The situation we are placed in today is oppositional. I am here as a defendant. You are here to judge me, or to support the process. But in reality I believe all of us here are on the same side – the side which desires justice, and to uphold the human civilisation of which this court is a part. And all of us have the capacity to work for that to happen.

I feel that not only is taking disruptive action the right thing to do, but that at this point in history, it is the only thing that makes sense to do. Anyone who wants to see a liveable future cannot afford to ignore this issue, or wait for others to act on it.